The genesis of these structures is Toshiko Horiuchi MacAdam’s explorations as a textile artist  and researcher dating back to the 1970s. The first public project, however, was for a national park in southern Japan in 1979.  This was followed by  a commission  from an art museum in Japan  for a sculpture children could not just look at  but touch, play with and experience through all the senses In 1990 Toshiko and her husband Charles MacAdam established Interplay Design and Manufacturing, Inc  in Nova Scotia, Canada, to develop the concept of  play ‘sculptures’  on a commercial footing, beginning with a project  for a national  park located in Tokyo.  The children’s park-within-a-park of which it is one of the principal features won a national design award in 1992. Eighteen  years later this project still delights and entertains large numbers of children just as it did almost a generation ago.

The structures are strong as well as beautiful utilizing specially constructed net which is  resilient and responsive to the slightest movement. Their innovative design allows tension to be maintained as the fibre stretches thereby enabling children to play safely.  Each project is engineered by Norihide Imagawa, one of Japan’s pre-eminent structural designers. 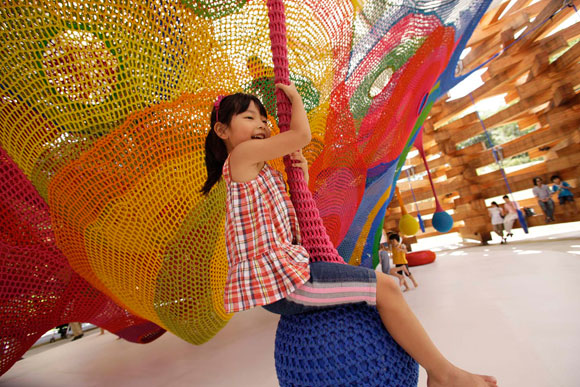